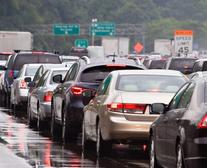 Rain is a major contributing factor for car accidents in the Inland Empire. This statement is especially true when the first major rain hits Southern California. The Inland Empire will often go through long stretches of time with no measurable rain. During these long dry periods, the asphalt accumulates significant amounts of oil and rubber from the traveling cars. Then, the rain comes washing loose the oil and debris. The combination of oil, water and debris creates a cocktail for a very slick road and increased occurrence of traffic accidents. As the rainy season progresses, generally, the roads while slick, are not as bad as that first rain.

Other Drivers Can Be Just As Dangerous as the Rain

Natural conditions are not the only risks created by rain soaked roads. Drivers, especially the inexperienced and young, fail to recognize that travel speeds have to be reduced, distances between vehicles must be increased, and attention to changing conditions must be intensified. With accumulated water on the roads, especially where there exists puddles or flooding, high speeds can lift a car so that it actually is not making contact with the asphalt. This is called hydroplaning. At that point, the driver often loses control of the car and is subject to whatever direction the car slides. The chances of hydroplaning is reduced with slower speeds in conjunction with newer and proper tires.

Wet roads and brakes necessitate greater stopping distances. In the Inland Empire, many drivers don't allow proper distances between the front of their vehicle and the back of the car or truck immediately in front of them, and that is on a dry day. When water is added to the situation and there is an emergency stop required, the stopping distance increases thereby raising the chance of a rear-end collision. Adding some distance between each car and the one in front of it will give the driver a better chance of avoiding an accident caused by the increased stopping distance.

Changing weather conditions, such as rain, snow, ice or wind demand the full attention of every driver. The varying quantity and ferocity of the rain can quickly diminish visibility. Snow and ice separates tire from road making driving extremely hazardous. Finally, wind can flip a high profile vehicle or can topple a motorcyclist. Preparation, with a properly equipped car, and making safety a priority improves the chance of a safe trip in inclement weather.