Despite decades of public safety campaigns designed to alert motorists of the many dangers associated with driving under the influence, drunk driving remains a leading cause of motor vehicle accidents, injuries, and deaths—both in California and across the country. These crashes can be catastrophic and, sadly, it's often the non-intoxicated driver and their 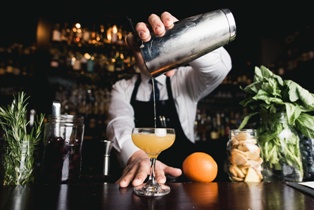 passengers who bear the brunt of the injuries and losses. Though the victims of drunk driving accidents may be entitled to compensation, the at-fault motorist may lack sufficient insurance policy limits (and personal assets) to fully cover the resulting medical expenses, property damage costs, lost wages, and other personal injury damages.

In some states, dram shop and social host liability laws allow victims to sue a third-party—such as a bartender or private party host who overserved the intoxicated driver—for additional compensation. Unfortunately, California's dram shop and liquor liability statutes are exceptionally narrow and rarely are servers of alcohol found liable.  Read on to learn more about these laws and the rare instances in which they can be applied in California car accident personal injury cases.

While dram shop and social host liability statutes vary dramatically by state and jurisdiction, they serve a similar purpose: To allow the victims of drunk driving crashes—or their surviving family members—to hold liquor vendors or social hosts civilly accountable for providing alcohol to a visibly intoxicated person who went on to cause an accident.

The name for these laws harkens back to 18th Century England, when bars and other establishments served alcohol by the spoonful or “dram.”

The Limitations of Dram Shop and Liquor Liability Statutes in California

Though many states allow drunk driving crash victims to file a separate, third-party civil claim for damages against a bartender, restaurant server, or private party host, California does not. In fact, California's civil code specifically states that the consumption of alcohol by the at-fault driver—rather than the serving of alcohol by a vendor or social host—is responsible for injuries and other damages resulting from intoxication.

California's limited allowance for holding a server of alcohol to an obviously intoxicated individual, only applies to a person under legal drinking age, or 21. For example, accidents victims may have grounds for a third-party civil claim against a social host who knowingly provided alcohol to a minor, or a liquor vendor who served an obviously intoxicated person under the age of 21.

Civil Code section 1714 describes the specifics of the nature and scope of California's Dram Shop Statute.  The Civil Code states in substance, that no social host who provides alcoholic beverages to any person can be held liable for injury to the person served the alcohol or to a third party as a result of the consumption of those beverages.  The sole exception to that absolute prohibition involves alcohol served to individuals under 21 years of age.  The scope of liability applies to a claim against a parent, guardian or another adult who "knowingly furnishes alcoholic beverages at his or her resident to a person whom he or she knows, or should have known, to be under 21 years of age." These individuals can be found the proximate cause of the injuries or death suffered, or in other words, they can be responsible for the injuries suffered.

In dram shop or social host cases involving minors, drunk driving accident victims can seek compensation for a wide range of damages, such as:

Consult an Experienced Attorney About Your California Car Accident Case

Even though California's dram shop laws are strikingly narrow, in cases where they can be applied, they can provide victims with an additional source of much-needed compensation. If you believe your drunk driving case is an exception to California's no civil liability for serving or providing alcohol to others rule, it's vital to contact an attorney as soon as possible to discuss your claim, rights, and options.  If there is an option to open up liability, there may be additional compensation available for the injuries suffered.

At the Inland Empire Law Group, our skilled attorneys know California's dram shop and social liability laws inside and out. We can investigate your case and help you explore all your options for compensation. To find out more about how we can help you, contact our office at (909) 481-0100 or (888) 694-3529 today to schedule an appointment for a free initial consultation.