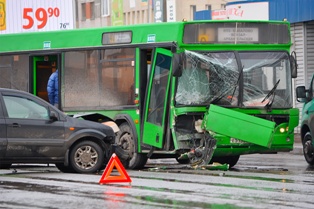 vehicles and motorists. Unfortunately, that expectation isn't always a reality. Accidents between commercial and private vehicles can and do happen—and the results can be catastrophic.

After suffering injuries in an accident caused by a negligent commercial driver, you may be entitled to compensation for medical expenses and other damages. Here's what you need to know before taking legal action.

According to the Federal Motor Carrier Safety Administration (FMCSA), there were more than 415,000 police-reported accidents involving commercial vehicles in 2015, resulting in more than 83,000 injuries and 3,598 deaths. Commercial vehicle accidents can have any number of causes, the most common of which include:

After being in a commercial vehicle crash, accident victims often wonder who they can hold responsible for their injuries and other losses. The answer to that question depends largely on the circumstances of the collision, but potentially liable parties may include:

Victims injured in commercial vehicle accidents can seek compensation from two main categories of damages: economic and non-economic. Economic damages are quantifiable losses, such as accident-related medical expenses, property damages, lost wages, and loss of earning capacity. Non-economic losses, on the other hand, are harder to quantify and include things like physical pain and suffering, mental and emotional anguish, scarring or disfigurement, and loss of enjoyment of life.

If you were injured in an accident with a commercial vehicle, it's important to understand your legal rights and options. The knowledgeable attorneys with the Inland Empire Law Group can review the facts of your case and help you explore your options for compensation. Contact the Inland Empire Law Group today at (888) 694-3529 to schedule an appointment for a free initial case consultation.