Head-On Collisions and Personal Injury Settlements: What You Should Know

Head-on collisions are often classified as serious car accidents due to the amount of vehicle damage and the likelihood of severe injury. If you've been involved in a head-on collision caused by another driver's negligence, you may be entitled to compensation.

Head-On Collisions Can Be Deadly

Frontal impact auto accidents, including head-on collisions, account for 53 percent of passenger vehicle occupant deaths. The Insurance Institute for Highway Safety says occupants of smaller and lighter vehicles are most at risk of death or serious injury in these types of accidents—even though 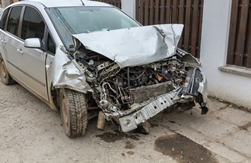 pickup drivers and SUV drivers are involved in a statistically higher number of auto accidents.

Many head-on collisions occur on rural roads that have two lanes and no median. These roads often have a number of curves and hills that impede visibility. Additionally, a lack of regular law enforcement patrols in rural areas makes drivers more likely to break traffic laws. The safest roads to travel on in terms of reducing the risk of head-on collisions are major highways where the traffic flow is separated with medians and access is controlled via on- and off-ramps.

Head-on collisions are considered the most serious type of auto accident due to the combined force of two moving vehicles. For example, two vehicles are approaching each other head on at 40mph each, the combined speed of the collision will be 80mph. The risk of death or severe injury increases as the speed of the vehicles approaching increase. Other factors in injuries include a weight discrepancy between the vehicles or if the occupants are not using seat belts.

Head-on collisions can cause a number of different injuries. The following is a brief overview:

Whenever you are involved in a head-on collision, it's important to seek medical treatment immediately. All injuries suffered in a head on collision often don't become apparent until several days after the accident. It's also possible to be more seriously injured than you first believed, since the adrenaline rush from the collision can temporarily mask many symptoms. One symptom which should receive immediate medical attention are head injuries, even if they appear minor, or injuries resulting in possible internal bleeding.

Head-on collisions can be caused by a number of different factors. The following is a brief overview:

Protecting Your Rights After a Head-On Collision

Liability for a head-on collision is usually determined by law enforcement officials and insurance investigators. However, it's important to keep in mind that California’s comparative negligence law allows you to still collect damages, even if you were found partially at fault. For example, you might be found 20 percent at fault for the accident if you were speeding and the other driver was trying to pass illegally. In this case, you'd receive 80 percent of the compensation you'd be eligible to receive if the other driver was 100 percent at fault for the accident.

Personal injury compensation can be divided into a few general categories:

Sometimes a head on collision can result in the tragic loss of life of a love one. Certain members of the surviving family may have a claim for wrongful death damager. The damages can be significant and complicated to calculate. You need to consult a personal injury/ wrongful death attorney to fully understand your rights.

The skilled attorneys at Inland Empire Law Group are committed to assisting California residents or their family members who have been injured or killed in head-on collisions. Please call (888) MY IE LAW to schedule a free, no-obligation consultation at either our Rancho Cucamonga or Victorville offices.