Don't Let This Happen To You: A Story About Incomplete Medical Records 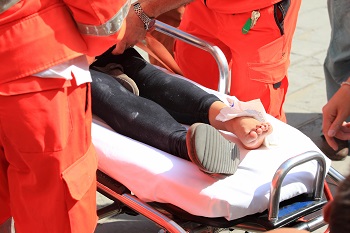 I just resolved a personal injury case for an amount less than I thought the auto accident injuries should have been worth had the medical records, prepared by my client’s Kaiser doctors, been properly documented regarding the cause of my client’s injuries.  So here is the background for this Wrightwood drunk driving auto accident claim.  Mrs. B (name changed to preserve her identity) was involved in a near head-on car accident involving a drunk driver on Highway 2 in Wrightwood, California.  The mountain road traffic accident caused our client’s truck to roll over several times until it rested on its rooftop.  Hanging upside down from her seat belt, she found her right foot stuck above her head.  With a bit of exertion, she was able to remove her foot but had to leave her shoe stuck in the totally destroyed pick-up truck.

From the site of the auto accident, she was transported by ambulance, briefly seen at the Arrowhead Regional Medical Center and released.  From there, she started seeing her physicians at Kaiser in Fontana.  Throughout this time, our client suffered from back and neck pain, along with right foot pain.  She also suffered from several pre-existing conditions.  Ultimately, our client had a right foot surgery.  Based upon the belief that all these injuries were related to the accident, a demand went out to the insurance companies (there were two insurance carriers involved).  One carrier settled with us for its policy limits of the available insurance for this mountain road accident while the other did not.

A Refusal to Settle By The Insurance Company

The second insurance company, an underinsured motorist insurance carrier, refused to contribute a significantly greater amount more than what had already been paid.  The reason for the refusal to settle this personal injury case stemmed from the way the medical records were written.  Despite our client indicating that she had advised her doctor’s from the very beginning that her foot injury arose from the date of the rollover car accident forward, there was no information placed in the medical records regarding the cause of the injury, other than stating she had a pre-existing condition.  Further, there were gaps in the medical records regarding any report of a foot injury.  Once the medical records were fully reviewed, there was found a complete lack of reference to the Wrightwood auto collision as being a cause of injury to the foot.  Since the right foot required surgery, the ability to link the foot surgery to the auto accident was eliminated from consideration, which was the greatest part of the claim.  The second insurance carrier settled for an additional payment, but for an amount much less than initially desired.

What Can We Learn From This Experience?

First, if you have been involved in an accident and suffered personal injuries, you must fully and completely disclose all your injuries and then make sure you reference those injuries each time you see the doctor.  For example, when filling out a form regarding your injuries, completely identify all injuries from the accident and clearly reference the timeline for those injuries.  If the injuries are improving, then indicate that information, but if things are the same or worse, do not be afraid to make sure you disclose this information to your physician.

Second, make sure your doctor writes down all your information and complaints.  Do not blindly believe that your records are accurate because you informed your doctor of all the proper information.  Because they are often so busy, they may not write down the information at that time and forget it later, or they are just not listening to what you are saying.  Ask to read your records, either at that time they are created or on your next visit and make sure your history and information is accurate.  Have the doctor correct any error at that time.  Doctors are not perfect historians.  So often we have found serious flaws in the records.  If the records are not accurate, the insurance companies will take advantage of the inaccurate information.  These errors can eviscerate the value of your personal injury case.

If you have been injured in a car accident, call Inland Empire Law Group today at (909) 481-0100 for a free consultation.