If You’ve Experienced Complications From a Retained Surgical Object, Here’s How Our Medical Malpractice Attorneys Protect Your Rights

Every day, over a dozen patients across the United States leave the operating room with an unfortunate souvenir. When doctors close up patients with sponges, surgical instruments, or other medical supplies left inside the body, serious and potentially life-threatening infections can result.

What Does a Retained Surgical Object Case Involve? 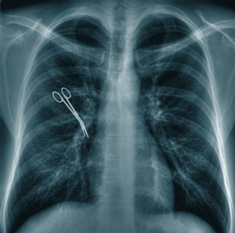 These types of cases are problematic because patients often don't know anything is wrong until they experience severe pain. At this point, the retained object has become infected and the patient will likely require emergency surgery. Consider the following examples:

Who Is Most at Risk for a Surgical Error Like a Retained Object?

Not surprisingly, patients undergoing emergency procedures are most at risk of developing complications from retained surgical objects. However, even those who've had routine procedures can have this problem if the surgical team encounters complications that create a chaotic operating environment.

The majority of cases involving retained surgical objects involve sponges left in patients who've had abdominal surgery. The pelvis, thoracic cavity, and vagina are also common places for this type of error to occur.

Some studies have shown that patients with a high body mass index (BMI) are more likely to be victims of a case involving retained surgical objects. The exact reason for this is unknown, however.

Because retained surgical objects are considered never events, hospitals implement a number of practices to account for the tools used during surgical procedures. Some of the most common include:

Medicare, Medicaid, and private insurers will not pay the cost of medical care necessary to fix complications from a never event. Hospitals must absorb these costs on their own.

Is A Retained Surgical Object an Example of Medical Malpractice?

Medical malpractice awards are difficult to estimate because they are based on a number of factors, such as your past and future medical bills and any loss of earnings or future earning capacity caused by the error. However, research studies have shown that malpractice claims from retained surgical objects generally cost hospitals between $100,000 and $200,000 per case. There have been multiple cases of lawsuits with as much as $2 million to $5 million in damages for the plaintiff.

The Inland Empire Law Group is dedicated to assisting patients with retained surgical objects who received treatment at hospitals or surgical centers in the Inland Empire, including hospitals in Fontana, San Bernardino, Colton, Victorville, Riverside and other local facilities. Contact us at (888) 694.3529 for details.