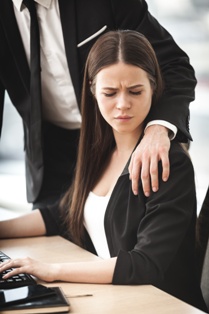 Attitudes toward women in the workplace have changed dramatically over the past few decades, largely for the better. However, despite progress being made toward accepting women as equals on the job, sexual harassment in the workplace remains a problem in the United States.

Regardless of whether the victim is a male or female, sexual harassment in the workplace is expressly forbidden by state and federal law. Because employment-based sexual harassment and discrimination violates Title VII of the Civil Rights Act of 1964, it falls under the enforcement of the U.S. Equal Employment Opportunity Commission (EEOC). This federal agency is tasked with eliminating sex-based barriers to equal employment opportunity.

Harassment of a sexual nature isn't the only kind of sex-based discrimination that occurs in the workplace. It's also illegal to make offensive comments about a person because of their sex, or make disparaging comments about their entire gender.

Examples of Sexual Harassment in the Workplace

Sexual harassment is behavior that can negatively affect a person's employment, whether by interfering with the victim's work performance, or creating an intimidating, hostile, or offensive environment. Examples of offensive conduct can include:

In some cases, victims may be demoted or even fired for refusing to put up with a harasser's sexual advances; however, victims of on-the-job sexual harassment may have grounds for a lawsuit even if they haven't sustained economic injuries.

Sexual harassment victims may be reluctant to report their abuse for fear of retaliation. Fortunately, it's illegal for employers to retaliate against employees who oppose employment practices that violate Title VII of the Civil Rights Act of 1964.

The EEOC recommends that the employee experiencing sexual harassment confront the harasser directly to let them know that their advances are unwanted and unwelcome. If that doesn't stop the harassment, the EEOC urges victims to take advantage of whatever employer complaint mechanism or grievance system at their disposal.

If all else fails, victims of workplace sexual harassment can contact the EEOC and ask them to begin an investigation into the harassment and hostile work environment.

Employers should take reasonable steps to prevent sexual harassment in their workplace, including clearly communicating a no-tolerance policy to employees. Those who fail to take the necessary precautions may be held liable, especially if the harassment leads to a negative employment outcome, such as failure to hire or promote, lost wages, or termination.

Are you experiencing workplace sexual harassment? Contact the Inland Empire Law Group at (888) 694-3529 to schedule an appointment for a free and confidential initial case consultation to find out how our attorneys can help.