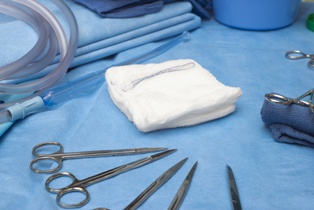 Even though the healthcare industry considers retained surgical items to be events that should never occur under any circumstances, the problem persists throughout the United States. There is no standardized database to track the number of surgical items left in patients each year, but a number of researchers have tried to get a grasp on the size of the problem.

What the Statistics Say

A Mayo Clinic study found that one in 5,500 operations results in a retained surgical object. About two-thirds of these cases involved surgical sponges left inside patients. The Joint Commission, a nonprofit safety watchdog for the healthcare industry, found 772 examples of foreign objects left in patients from 2005 to 2012. Of these cases:

California is one of a handful of states seeking to reduce retained surgical items by fining hospitals who are found to have committed this error. From 2010 to 2013, the state fined hospitals a total of $1.8 million for 30 cases of retained sponges.

Malpractice cases in California’s Inland Empire involving retained surgical objects require skilled legal representation. Inland Empire Law Group's experienced California malpractice attorneys can help you build a successful claim by assessing the value of your case, documenting expenses, gathering evidence, and negotiating with the insurance company on your behalf. Call (888) 694-3529 to schedule an appointment at our Rancho Cucamonga location or our satellite office in Victorville.

by David Ricks [email protected]
Connect with me
Rancho Cucamonga Car Accident Attorney and Victorville CA Personal Injury Lawyer Serving Inland Empire
Be the first to comment!
Post a Comment
1Steps to Take if You Think You Have a Malpractice Claim 2California Law Limits Medical Malpractice Compensation 3How Do You Prove Negligence or Malpractice? 4How Long Do I Have to File a Malpractice Suit?