Is it illegal to wear headphones while driving? 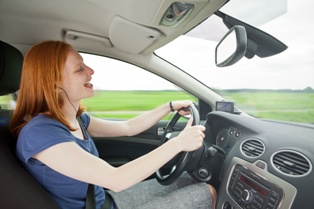 Many drivers enjoy listening to music, audiobooks, or radio programs to pass the time during their daily commute. However, in some circumstances, these types of in-vehicle entertainment can prove dangerously distracting. As a result, California is one of several states that have laws restricting how drivers use audio media while operating a vehicle.

The Dangers of Driving While Using Headphones

Being able to hear what's going on around the vehicle—such as the sounds of traffic, approaching emergency vehicles, or potential hazards like screeching tires—is essential to defensive and safe driving. Playing music or other audio media too loudly can make it difficult for drivers to hear sounds that could help them avoid accidents. Research from the AAA Foundation for Traffic Safety shows that listening to audio media through headphones, earphones, or earbuds not only further diminishes a driver's ability to hear critical sounds around them, but also increases their cognitive distraction level.

California has long banned the use of headphones and earplugs while driving or biking, but until just a few years ago, it was perfectly legal to wear earphones or earbuds. That changed on January 1, 2016, when a state law went into effect making it illegal to wear earbuds on top of the ears (these types of earbuds are also sometimes referred to as earphones) or inside the ear canal—regardless of whether they're actually playing audio. Motorists who violate the law can face fines of $160 or more. Additionally, though California law prohibits headphones, earphones, or earbuds on or in both ears, drivers using a single earphone or earbud are still in compliance.

Do You Need an Experienced Rancho Cucamonga Car Accident Attorney?

If you were seriously injured in a car accident caused by the negligence of a driver who was wearing both headphones, earphones, or earbuds at the time of the accident, you may have grounds for a personal injury insurance claim or lawsuit. Have questions about your case? Call the Inland Empire Law Group at 888-694-3529 or 909-481-0100, or complete our online contact form to schedule an appointment for a free initial case consultation.