Comparative Negligence Laws: How to Collect Damages Even if You Were Partially at Fault

Being injured in a car accident can be a traumatic experience, particularly if you sustained serious injuries, are facing a painful and lengthy recovery period, or have incurred expensive medical bills. Most accident victims know if the car crash wasn't their fault, they have the right to seek compensation for injuries to help lighten their financial burden. However, victims who were at least partially responsible for the accident that caused their injuries may be reluctant to explore their legal options. They may fear that their role in the accident will prohibit their right to compensation, but you deserve to know that California accident victims who are partially at fault for their accident can still receive financial damages.

Even if you were partly to blame for the accident in question, California’s pure comparative negligence laws allow you to pursue compensation for medical bills related to the accident, property damage to your vehicle, lost wages if related injuries leave you unable to work, and even physical pain and emotional suffering. The key to successful comparative fault cases is understanding the concept of comparative negligence and having the representation of a skilled personal injury lawyer.

What Is Pure Comparative Negligence?

For personal injury cases (which includes traffic accidents), California uses a comparative negligence system to divide fault between the involved parties. This allows victims to pursue and recover financial damages regardless of how much they were at fault. For Californians, this is advantageous because comparative fault laws in many other states don't allow victims to collect damages if they are found to be more at fault than the other party.

However, pure comparative negligence laws don't necessarily mean that plaintiffs and defendants will receive equal compensation. In these cases, the percentage of fault is determined by a judge or jury, with the financial recovery reduced accordingly. Comparative fault findings are also used by insurance adjusters when determining the value of a claim.

What Is Comparative Fault?

Comparative fault is based on the degree of responsibility the jury or judge determines each victim had in the accident. For example, if a drowsy driver hits another vehicle whose driver was texting—behavior that is considered distracted driving—it may be determined that the fatigued driver was 80 percent at fault, while the distracted driver was 20 percent at fault. In a case where the damages totaled $100,000, the texting driver would receive $80,000, while the drowsy driver would receive $20,000 in damages. 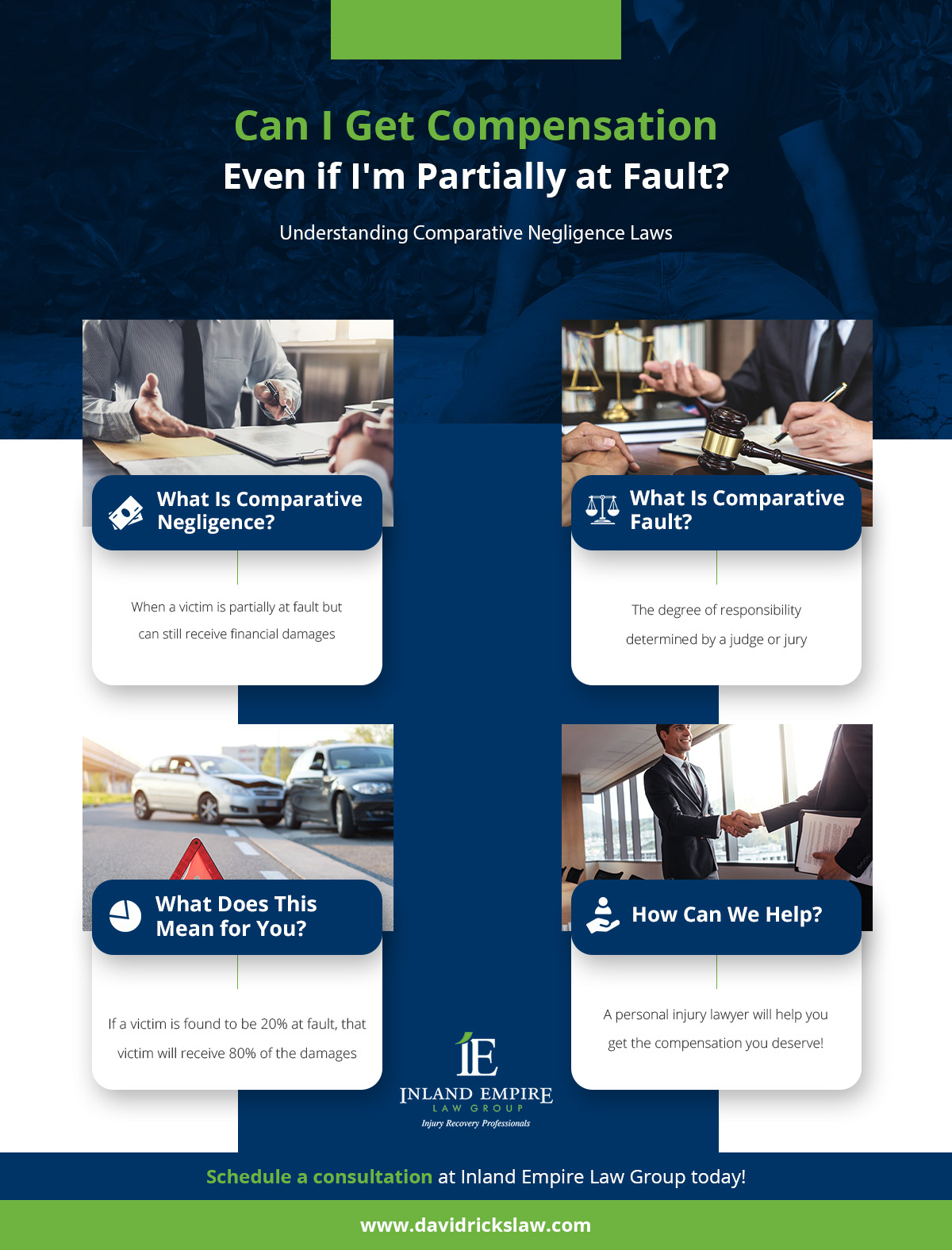 Comparative fault cases can be challenging, particularly if a jury is responsible for determining each party's degree of negligence. When pursuing damages for injuries sustained in an accident in which you were partially at fault, it's important to have an experienced personal injury lawyer to help you. Contact the knowledgeable legal team at the Inland Empire Law Group to schedule a no-cost evaluation of your case. We've handled many car accident injury and pure comparative negligence cases, and we are eager to help you pursue any compensation you deserve. Call 909-481-0100 today to request your consultation at either our Victorville or Rancho Cucamonga offices.