Red Light Running Accidents and Fatalities Are on the Rise 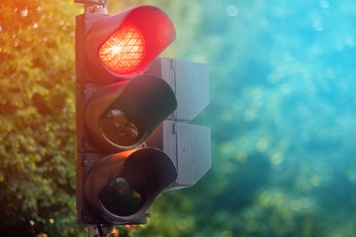 Stopping at red lights is one of the most fundamental rules of the road. The importance of obeying this particular traffic signal is a tenet so basic that people are expected to know it long before they take their first driving test. It's knowledge so common that you'd be hard pressed to find even a preschooler who doesn't know that “red means stop.”

Despite the fact that this essential safety concept is constantly reinforced in our society, there are still people who fail to put it into practice behind the wheel. Almost every driver has seen someone negligently or intentionally drive through a red light.  Sometimes, these mistakes did not result in a collision, while at other times, the failure to comply with the rules of the road, serious consequences can occur.  For some reason, red light running or violation accidents, injuries, and deaths have risen dramatically in recent years.

If you were hurt—or someone you love was killed—in a crash caused by a driver who ran a red light, you may be entitled to compensation. Here's what you need to know before taking legal action, including how our dedicated injury recovery professionals can help maximize the value of your California car accident claim.

A data analysis conducted by the AAA Foundation for Traffic Safety in 2019 provides valuable insight into the hazards associated with running red lights. For example, the analysis found that:

There's no question that disobeying traffic signals is dangerous. The question is: Why do motorists run red lights when they're aware of the risks? Some of the most common reasons drivers fail to stop at red lights include:

Red light running accidents happen at all types of intersections and, as a result, the injuries sustained by those involved can be devastating or even fatal. This is especially true for pedestrians, bicyclists, and motorcyclists—all of whom lack exterior protection. Common injuries reported by red light running crash victims include:

If you were seriously injured—or you lost a loved one—in a crash caused by a red light runner, the experienced attorneys with the Inland Empire Law Group can help you fight for the compensation and justice you deserve. Depending on the circumstances of the case, you may be entitled to compensation for medical expenses, property damages, lost wages, loss of earning capacity, pain and suffering, and other damages. Contact us today at (888) 694-3529 to schedule an appointment for a free, initial consultation.