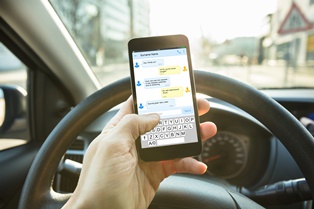 Texting and driving is dangerous because it encompasses all three types of distracted driving behaviors: visual, manual, and cognitive.

Reasons Why People Continue to Text and Drive

An AT&T Inc. poll conducted as part of a campaign to raise awareness of the dangers of texting and driving found that 98 percent of drivers believed texting and driving was dangerous, but 75 percent admitted to doing it anyway. Their reasons were varied:

Teens are often portrayed as the worst texting and driving offenders, but this behavior occurs with all age groups. In fact, 48 percent of teens report being in a car while the adult driver was texting. When teens observe adults texting and driving, the teens gain a false presumption of safety.

Texting and driving laws are generally decided on a state by state basis. California law bans texting while driving for all drivers, with the following exceptions:

Police have primary enforcement authority for texting and cell phone use prohibitions, which means you can be pulled over for texting and driving even if you were obeying all other traffic laws. However, a violation won't result in added points on your driving record.

The Federal Motor Carrier Safety Administration bans all commercial vehicle drivers from texting while driving. Federal employees are also banned from texting and driving while on the job or using government equipment, regardless of what state they are in.

Staying Safe Behind the Wheel

The easiest way to stay safe is to simply keep your phone out of reach while you're driving, so you're not tempted to answer or send texts. However, there are also a number of apps that block texting and/or incoming calls while you're driving. Cellcontrol, Drive SafeMode, and Live2Txt are some of the most popular options.

If you're involved in an auto accident caused by a driver who was texting, you're entitled to compensation for medical expenses, lost wages, and pain and suffering. Protect your rights by hiring an experienced personal injury attorney to negotiate the highest possible settlement or secure a verdict in your favor.

The team at Inland Empire Law Group is committed to helping injured California residents receive fair and prompt personal injury settlements or to protect their rights in trial. Contact us today at (888) 694-3529 to schedule a free, no-obligation consultation at our Rancho Cucamonga or Victorville locations.