What You Need to Know About Airbags

When combined with proper seat belt use, airbags offer passenger vehicle drivers and passengers the most effective protection against accident-related injuries and fatalities. From 1987 to 2015, airbags saved the lives of  more than 44,800 drivers and passengers, according to the National Highway Traffic Safety Administration (NHTSA). Additionally, the 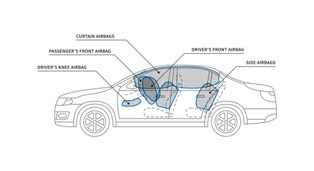 However, though airbags are undeniably a life-saving technology, they're not without risks. Between 1990 and 2008, the NHTSA recorded nearly 300 airbag-related deaths. If you were seriously injured by an airbag in an accident caused by another person or entity's negligence, you may be entitled to compensation for the additional injuries suffered from an airbag. Here's what you need to know before taking legal action.

Frontal airbags are the most common airbags found in vehicles and the ones most commonly engaged. The government has required frontal airbags in all new cars, vans, light trucks and other passenger vehicles since the 1999 model year. The airbags that make up the frontal airbag system are located inside the steering wheel and behind a panel on the passenger-side dashboard, and deploy to protect occupants in the event of a head-on collision or a side-impact collision with sufficient forward movement. Other common types of airbags include:

Constructed of lightweight fabric, airbags are connected to sensors that trigger nitrogen or argon igniters that cause the bags to rapidly inflate, deploy, and deflate in the event of an accident. Airbags are designed to deploy during head-on, side-impact, rear-end, and rollover crashes that occur at speeds higher than 8 to 10 MPH.

Unfortunately, airbags don't always work as intended and, when they don't, they can cause serious injury or even death. Common airbag issues that can lead to injury include:

The Takata Corporation, a leading Japanese airbag manufacturer, has been plagued by recall woes since 2015, due to faulty igniters that caused airbags to explode and release deadly metal shrapnel. Takata's defective airbags have been linked to nearly 200 injuries and more than a dozen deaths, leading to the largest automotive recall in U.S. history. By 2019, more than 70 million vehicles will have been affected by the recall.

Were You Injured in a California Car Accident?

If you were seriously injured by an airbag in an accident caused by another party's negligence, you may be entitled to compensation for medical expenses and other damages. Our Rancho Cucamonga car accident lawyers can help you understand your legal right and options after a traumatic accident. Contact the Inland Empire Law Group today at (888) 694-3529 or (909) 481-0100 to schedule an appointment for a free initial case review at either our main office in Rancho Cucamonga or our satellite office in Victorville.