Having a health condition that could affect driving performance is dangerous for any motorist, but for commercial truckers, who spend far more time on the road than the average driver and sit behind the wheels of vehicles that can weigh up to 80,000 pounds, it can be particularly hazardous or even deadly.

Though the Federal Motor Carrier Safety Administration (the government agency responsible for regulating interstate trucking in the U.S.) requires truckers to pass a health screening in order to obtain a commercial driver's license (CDL) from their home state, the effectiveness of the screening process is limited at best. 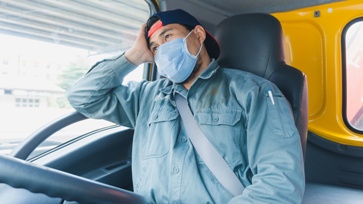 The major flaw? The process depends on the “honor system.”  Drivers are asked to disclose medical conditions that could potentially disqualify them from driving commercially.  When telling the truth may compromise their ability to make a living, there is a financial incentive to be untruthful in the screening process.

Considering that being honest about their health could cost truckers their careers and sources of income, it's not surprising that some would find the idea of hiding their medical history tempting. Unfortunately, omitting or falsifying information in the Health History section of the commercial drivers' examination is not only illegal, it can endanger everyone on the road.

Commercial drivers are tasked with operating large trucks and buses that are capable of causing serious damage in the event of an accident. These massive vehicles handle much differently than their smaller, lighter passenger vehicle counterparts. Drivers have to grapple with blind spots, limited maneuverability, and increased stopping time and distance. As a result, truckers need to be at the top of their game—in skill and in health. Sadly, some continue to be dishonest about their medical history, even when the conditions in question wouldn't be disqualifying, but would possibly require more frequent re-certification. Consider these crashes, which involved truckers who hid dangerous medical conditions:

What You Should Know About California Truck Crashes

When commercial drivers cause accidents that lead to injuries or deaths, they, the company they drive for, and others may be responsible for compensating victims. However, truck crash litigation is complex and complicated, and you'll need the help of an experienced attorney to ensure a fair resolution. Here's why:

Discuss Your Case With an Experienced Truck Accident Attorney

If you were hurt, or you lost a loved one in a California truck crash caused by a medically unfit commercial driver, the Inland Empire Law Group's skilled team of injury lawyers can help you understand your rights, explore your options for compensation, and fight for the fair recovery you deserve. Contact us today at 909-481-0100 to schedule an appointment for a free initial consultation to discuss the details of your case. Don't wait—delaying action can put essential evidence in jeopardy of being lost or destroyed.