Vehicles that drive themselves sound like something from science fiction, but autonomous cars are not only real, they've been in development—and on the road—for years. Though vehicles with automated technologies were touted as being safer than their human-operated counterparts, so far, the reality hasn't lived up to that 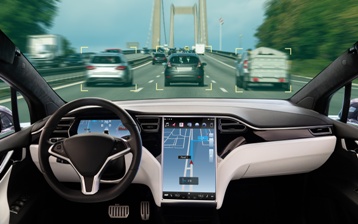 In fact, semi-autonomous vehicles from manufacturers have repeatedly been involved in accidents, so much so that they've drawn the attention of the National Highway Traffic Safety Administration (NHTSA). The agency has opened multiple investigations into autopilot crashes as a result.

Hurt in a crash with a driver who was using an autonomous vehicle setting? You may be entitled to compensation. Here's what you need to know about this emerging technology, auto accident cases in which it played a role, and how our law firm can help you recover fair compensation.

The Promise of Autonomous Vehicles

According to the research from the NHTSA, a shocking 94 percent of all serious auto accidents are caused by human error or choices. Safety experts have long posited that fully autonomous vehicles that are better equipped to spot hazards and react to them more quickly could dramatically reduce errors—in turn reducing the number of accidents and the severity of their consequences. Eliminating the majority of traffic crashes and their costs could have significant benefits for society. Self-driving vehicles could also increase mobility for individuals with disabilities.

That's not all. One of the most fascinating aspects of fully autonomous vehicle technology is that it would allow vehicles on the road to cooperate, reducing congestion and speeding along the flow of traffic.

The NHTSA recognizes six different levels of automation, which are as follows:

As of July 2021, there are still no fully autonomous vehicles on the market in the United States.  However, there are developments being made and vehicles being tested to acheive full autonomy very soon.

Companies at the Forefront of Automated Vehicle Technology

Companies around the world are in a race to get their autonomous cars on the road and, so far, Waymo (formerly called the Google self-driving car project), Argo AI, and Baidu are among those leading the pack. However, the popularity of (and the hype surrounding) Tesla's Autopilot feature might give you a different impression.

An important thing to note: While the name of the feature makes it sound like Autopilot-equipped Tesla's can handle the full task of driving, that isn't actually the case. Tesla Autopilot is a suite of advanced driver-assistance features and, despite being described as “full self-driving capability,” is actually just a Level 2 automation system. As mentioned above, this means that the vehicle can, in some cases does control steering and braking or acceleration at the same time, but the human driver must remain vigilant and perform other driving tasks.

Self-Driving Cars on the Road

There are a surprising number of companies currently testing various self-driving cars throughout the country, such as:

Some of the above companies, as well as Aurora, Tesla, and TuSimple, are also testing autonomous, self-driving semi-trucks. For example, a commercial truck from the California-based tech firm TuSimple successfully completed a 951-mile journey from Nogales, Arizona, to Oklahoma City in May 2021.

Tesla vehicles have been involved in a number of concerning crashes, more than two dozen of which are under investigation by the NHTSA. Additionally, drivers who've used Tesla's “self-driving” Autopilot feature have reported problems with the system, some quite worrisome. For example, the partially autonomous program:

Though the system has a safety feature that is supposed to ensure there's a human driver at the ready, multiple Tesla owners have filmed themselves “tricking” the system into thinking they're in the driver's seat when they're really elsewhere in the car.

Injured in a crash caused by a driver using the autonomous features of their car?  Here are some key points to keep in mind if you're considering filing an insurance claim or lawsuit:

The Inland Empire Law Group offers complimentary initial consultations to prospective clients. Contact us today to discuss your case, and explore your legal rights and options.