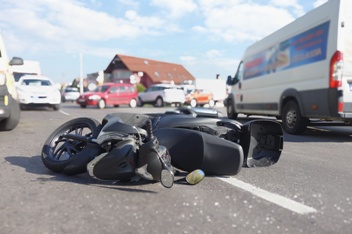 Serious motorcycle crashes have been on the rise for decades—both in California and across the country. In fact, according to research cited by the San Gabriel Valley Tribune, motorcycle-involved motor vehicle accident fatalities have more than doubled since 1997.

Even if you were fortunate enough to survive a devastating motorcycle crash, you may find yourself temporarily or permanently unable to work, facing a long and grueling road to physical recovery, and burdened by a previously unimaginable amount of unexpected medical debt. However, if the accident in which you were injured was caused by another person or company's negligence, you may be entitled to compensation. Here's what you need to know before filing a motorcycle crash insurance claim or lawsuit.

Like most types of “accidents,” motorcycle crashes are largely preventable. Common negligence-related motorcycle accident causes include:

Motorcycle Crashes Can Cause Catastrophic Injuries

In the event of an accident, passenger vehicle occupants are protected by a strong steel exterior, while the only thing standing between motorcyclists and the road is their riding gear. Considering the complete lack of exterior protection, it isn't difficult to understand why so many motorcycle crashes result in severe or even catastrophic injuries to riders. Common injuries associated with motorcycle accidents include:

Filing a California motorcycle crash insurance claim or lawsuit allows you to seek financial compensation for losses that have a quantifiable monetary value, as well as for intangible losses with subjective value. Damages available in motorcycle accident cases may include:

Why You Need an Experienced Motorcycle Crash Attorney

Let Us Help You Investigate Your Right to Recovery

Want to find out how the knowledgeable personal injury attorneys with the Inland Empire Law Group can help you resolve your motorcycle crash case? Contact us today at (888) 694-3529 or (909) 481-0100 to schedule an appointment for a free initial consultation.