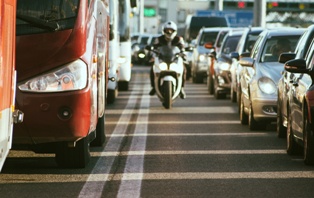 motorcyclists. In fact, one study found that 80 percent of California motorcyclists regularly lane split on the freeway.

Despite its popularity, there are questions surrounding both the safety and legality of lane splitting, also known as lane sharing or filtering. Contrary to popular belief, lane splitting is actually legal in California. State law never specifically forbade the practice and, in 2016, Governor Jerry Brown signed AB 51 into law, giving the California Highway Patrol (CHP) the ability to develop lane splitting guidelines.

The guidelines include tips to help motorcyclists who engage in lane splitting to do so more safely, as well as safety advice for motorists. CHP tips for lane-splitting motorcyclists include:

The CHP also offered the following tips for motorists:

Were you hurt in a California motorcycle accident that wasn't your fault? Whether you were the motorcyclist involved in a traffic collision, or a motorist who was struck by another vehicle, the knowledgeable attorneys with the Inland Empire Law Group can investigate your claims, help you understand your rights and potential options for compensation, and present a strong case. Do you have questions about a California lane-splitting motorcycle accident? Contact us today at (888) 694-3529 to schedule an appointment for a free, no-obligation legal consultation.