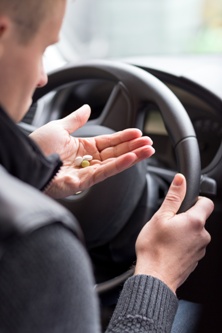 Most people are well aware of the dangers of drunk driving, but research shows that driving under the influence of drugs—and not just illicit ones—can be just as dangerous. Like alcohol, illegal drugs—as well as some prescription and over-the-counter medications—impair driving performance, putting the drugged driver and everyone else on the road at risk.

A drug-related car accident can leave victims seriously injured, unable to work as they struggle to recover, and facing an onslaught of unexpected medical debt. Fortunately, if you were hurt in a California car crash caused by the negligence of a drug-impaired driver, you may be entitled to compensation. A skilled personal injury attorney can help you understand your legal rights and options, and fight for a fair financial recovery. Here's what you should know if you're considering taking legal action.

It's difficult to determine just how many people drive under the influence of drugs or how many car accidents are caused by drugged drivers. This is true for a number of reasons, including that a reliable roadside drug test does not yet exist. However, here's what we do know:

Common Drugs and Their Effects on Driving Performance

Many illegal, prescription, and over-the-counter drugs can have impairing effects. The following are some of the most common types of drugs associated with car accidents, as well as how they effect driving performance.

The effects of the opioid crisis on car accidents is particularly alarming, as studies have found that driving under the influence of these medications can double the risk of being involved in a crash.

Seeking Compensation for Injuries Caused by a Drug-Impaired Driver

If you were injured in a crash caused by a drugged driver, you may be entitled to compensation for a wide range of damages, including medical expenses, property damages, lost wages, loss of earning capacity (if you can no longer work or only able to work part time), physical pain and suffering, mental and emotional anguish, and other losses. Here's what you can do to help protect your right to a fair recovery.

Consult an Experienced Attorney About Your Car Crash Case

At the Inland Empire Law Group, our skilled injury recovery professionals help victims hurt by drugged or drunk drivers fight for and obtaining the compensation they deserve. Contact us today to schedule an appointment for a free initial consultation to find out how we can help you with your case.  Call now to get immediate help.  (909) 481-0100.